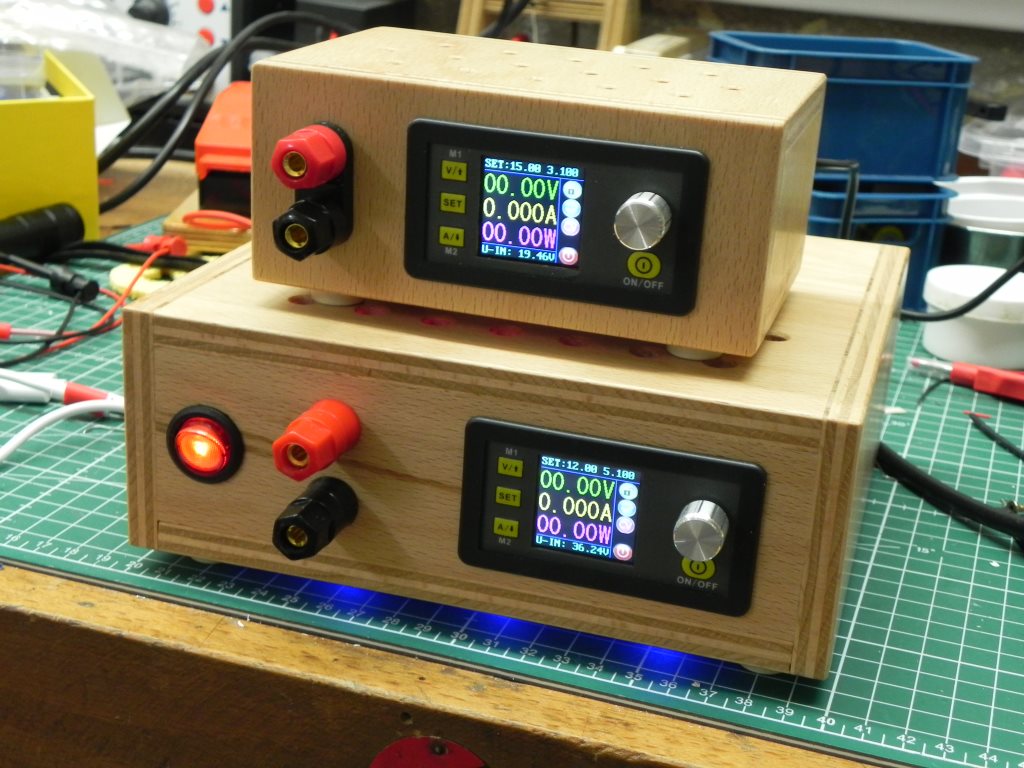 The “DPS” series of power supplies from the Chinese manufacturer
Ruideng is popular among hobbyists. It allows to set voltage and current, but still needs a source power supply – so basically it’s a DC buck converter. It also doesn’t come with a case. I built three cases, using some scraps of plywood. Two cases are for the DPS 3003 and DPS 3005, respectively. The third on isn’t for the DPS 5020 itself, but for the 60 Volts source power supply it needs.

This is the smallest of the power supplies. It only contains the DPS 3003 itself and will be powered by a external 19 V laptop power supply. The DPS 3003 could handle more, but for most of the time this will be enough, especially since I have other supplies available.

On the front are two banana terminals for the output DC voltage. On the backside is a switch to toggle the DC input voltage and a LED to show if the DC power is turned on or not.

I used 10 mm plywood, put together with wood glue. The holes were cut and drilled before assembling the case. To get the holes in the top and in the lid right, I created a simple paper template with Inkscape and used an awl to mark the points. Then I used the drill press to drill the actual holes. Before putting anything in the case, I sanded it down using my belt sander and applied some oil finish – but only on the outside.

After the finish, I put in the DPS 3003 along with the banana terminals on the front and a DC connector, switch and status LED on the backside.

There are many more pictures on Imgur.

This case contains not only the DPS 3005, but also a 36 V DC power supply to power it. The switch on the front toggles the mains power. This device also came with a Bluetooth extension board, which is mounted inside the case and connected to the DPS 3005 as well.

There are many more pictures on Imgur.