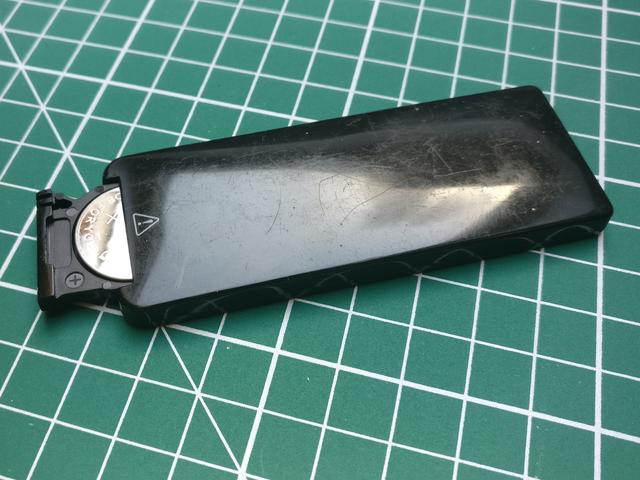 A while ago, I got some stereo speakers named “R1280T” from Edifier. These came with a simple, three button, remote control labeled “RC10“. I always had problems using this remote, the range was poor and I needed to hold it directly in front of the left speaker to work (because that’s the one with the IR receiver). After a while, even that didn’t work anymore.

I tested the battery’s voltage, a 3 V button cell type 2025, which was good. I then tried my smartphone camera to check if the IR emitter actually lights up, when buttons are pressed (because the camera can “see” infrared light). This worked too, but seemed kind of weak in comparison to other remote controls.

I also found the battery to sit quite lose in its slot. But not that bad. Still… maybe the battery doesn’t make a good contact? Bingo! After deliberately pressing down on the case where the button cells sits, the remote worked instantly a lot better.

I thought about putting some folded aluminium foil or something similar in the slot. But then, I simply put a 2032 instead of the supplied 2025 in. I’m not 100% positive, but it seems they shipped the wrong battery with the remote or the battery tray is too big for the cell.

With the 2032 battery, it works perfectly fine now. Wish I had this idea sooner! Maybe this helps someone else, too.