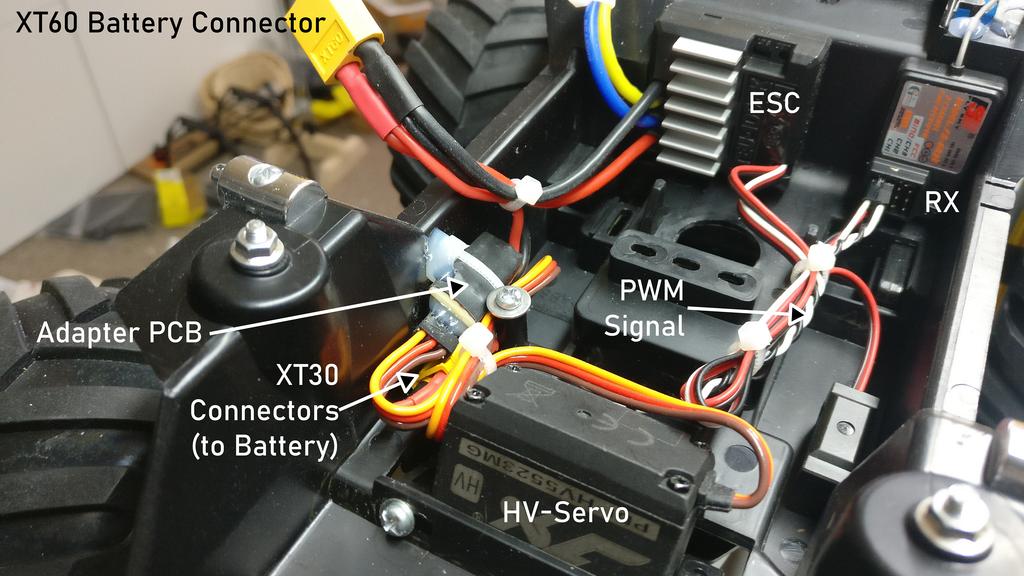 In most(?) or at least many cases, your steering servo is only connected to your receiver, which is powered by the inbuilt BEC of your ESC.
These Battery Eliminator Circuits (BECs) are basically voltage regulators that converts your battery voltage to a voltage of about 5 to 6 Volt.

Connecting the servos to the receiver is simple, since it gets its signal and power from the same connector.

There are also servos available, which are labeled “HV”, “high voltage” or something similar. These servos allow for a higher input voltage and therefore can be powered directly by the battery.

The exact voltage range depends on the individual device type (check the datasheet!), but at least 2S (about 8,4 V max) are supported by them. Some of these devices still work on a BEC, using only 5-6 V, but are actually designed for using a higher input voltage. Some of these servos only reach their “full potential” by being powered directly by the battery.

The primary advantage of using such a servo, is, that the BEC is unburdend by a significant amount of power, making the receiver in most cases the only device still powered by the BEC. Sudden servo movements may lead to voltage drops, which, in turn may disturb the receiver or even make it reset completely. For this reason some people need or want to plug in a capacitor in parallel to the other channel connectors to stabilize the voltage. This shouldn’t be necessary anymore, if the servo is powered directly by the battery.

The whole setup should also be more efficient, since the voltage regulator, especially if a linear one, will lose/waste some of the battery power by heating up.

A higher voltage may also allow for higher total power, since the current doesn’t need to be as high anymore (and may therefore be limited on regular servos).

The most obvious disadvantage is, that the servo can’t be plugged directly into the receiver anymore. There needs to be some kind of (simple) circuit, that connects only the ground and signal wires to the receiver and the ground and power (VCC) wire to the battery. There are some adapter cables already available for that — or you can just build your own. The picture below shows such a circuit on a perfboard. This circuit also includes a big capacitor, which is nice to have, but not really necessary.

If the HV servo is limited to, for example, 7,4 V nominal voltage (2S LiPo battery) you can’t just plug in a 3S or even 4S battery anymore. In this case the servo needs to be powered by the or a BEC, since the battery voltage is simply to high and would damage the servo.

As soon as the battery is plugged in, the servo is powered. This may or may not be a problem, depending on the power consumption of the servo when idle. For the HV servos that I’m using, that doesn’t seems to be an issue, at least not for some hours or days.

For the connection to the battery, I decided to use a female XT30-connector on the adapter. I also added male XT30-connector in parallel to the XT60 battery connector, powering the ESC. Of course this could also be soldered directly, without using additional plugs at all.

The HV servo is plugged into the folded headers on the left (see picture). The yellow PWM signal wire is connected to the receiver. Note, that both connections also get a black ground wire.

In the next picture the same setup is used on the Tamiya Lunch Box.